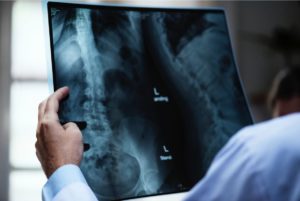 Low back pain of discogenic origin is a challenging condition to manage. It can be slow to improve and its high pain severity can be extremely disabling. The pain is often made worse with sitting and bending forward, which are two common postures and movements required for work and every day living.  In the past, it was thought that the larger the protrusion, the poorer the outcome since very often, these can result in impingement on either the exiting nerve roots at best or the spinal cord at worst. When severe, this condition often results in sciatic pain or pain felt down the lower extremities and if the disc pushes on the nerve root, it can result in pain, numbness, tingling and weakness in one or both extremities.  The leg symptoms can be worse than the low back pain.

Fortunately, the vast majority of discogenic low back pain do improve with time and short term activity modification including reducing the frequency and duration of sitting, bending, twisting and lifting. Many respond well to moving in the opposite direction of the pain provoking movement direction. Walking and frequent changes of position can provide short term relief. Even in the acute stage, some strengthening exercises can be performed to reduce muscle weakness. Staying active, activity modification and repeating relieving postures and movements (specific exercises) as opposed to bed rest are the best advice for these conditions. This is because the natural history of disc protrusions/prolapses/extrusions is a gradual reduction of the size of the protrusion (the terms used in the scientific literature is quite inconsistent.  Of greater importance is the extent to which the disc encroaches into the spinal canal.)

Benson and his colleagues out of the Royal Berkshire Hospital in Reading, England were one of the first to investigate the long term history and progression of massive disc prolapses.  “Massive” was defined as a reduction of at least 50% of the spinal canal by the offending disc.

A great study asks great questions.  And these were theirs:

1. Is it safe to adopt a “wait and watch” policy for cases of massive disc herniation, thus allowing time for the symptoms to resolve spontaneously?

2. Can cases of massive disc herniation show clinical improvement which is complete and sustained?

3. Is there a trend for massive disc herniations to cause recurrent clinical crises?

4. Is there an unacceptable risk of nerve damage or cauda equina (spinal cord) syndrome resulting from the conservative approach?

5. What happens to the large volume of nucleus pulposus (inner part of the disc) lying within the canal? Does it disappear by a process of resorption or does it remain in the canal?

At 7 years, the non-surgical group reported a whopping 90% satisfaction rate compared with 50% in the operated group.

What is interesting is there was no correlation between the initial disc volume (amount of prolapse) and the level of patient disability initially and at the follow up periods. This is why MRI findings are not good predictors of a patient’s pain level or function both in the early stage or in the future. In fact, the prevalence of asymptomatic disc findings have been reported to be as high as 37% in 20 year olds and 96% in 80 year olds.

Is impact activities like running healthy for discs? One study found that jogging (20-40km per week) and long distance running (50+km per week) increased disc height and improved disc composition of the nucleus pulposus compared to slow walkers and sedentary people. Like bone and muscle, it appears that in healthy discs at least (the study recruited 25-35 year olds with healthy discs), lumbar discs will adapt by getting healthier and more robust. Unfortunately, what is not known is if this applies to the older population with pre-existing disc degeneration.

What does all this mean to us? Here are the authors’ answers to the above mentioned questions:

Establishing a preferred movement
direction especially in the early stages
of an acute episode of discogenic pain
is important.

1. It is safe to adopt a “wait and watch” policy for cases of massive disc herniation if there is any early sign of clinical improvement.

2. Where clinical progress is evident, 83% of cases of massive disc herniation will have sustained improvement.

3. Only 17% of cases will have recurring crises of back pain and sciatica.

4. If there is evidence of clinical improvement, massive disc prolapses do not appear to carry a risk of major nerve damage or cauda equina syndrome.

5. Massive disc herniations usually reduce in volume and by 6 months most are only a third of their original size.

My own personal conclusions?

1. Avoid early MRI scans if they are not warranted.

2. Seek the advice of a physiotherapists whom you trust on how to move, how much to do and what movements to avoid. Early rehab is vital.

3. Be patient. The vast majority of discs heal. Physiotherapy, medications, and even injection therapies can be helpful adjuncts for pain relief to facilitate movement, activity and sleep.

4. Loading activities like running and weights are healthy but should be progressed slowly.  Some weight exercises may need to be discontinued until full recovery and then re-entered into carefully. The name of the game is activity modification and load management. Compliance is vital. Seek advice.