With 4 weeks left before the race, here is blog 3 of 5 to help you prepare!

Recently, I assessed a runner with pain along the inside arch of his right foot. He developed this gradually while running 3-4 times a week over a 6 month period. The pain worsened to the point that he had to stop running for 6 weeks. However, upon return to running, his pain returned again. His foot felt worst in the mornings, causing him to limp for 15 minutes before “it warmed up.” Running however was out of the question as the pain would cause him to stop immediately.

This runner visited his doctor and attended several clinics for treatment. He was diagnosed with chronic plantar fasciitis with the recommendation to purchase $600 orthotics and to attend for shockwave therapy at a cost of $150 per session for 6 sessions. However, before pursuing this expensive endeavour, this runner decided to visit me for a 5th opinion.

After a thorough history and examination, Mr. Runner demonstrated the following:

1. Weakness of his right hip internal rotators
2. Weakness of his right foot toe flexors
3. Increased flexibility of his hamstring and calf muscles (he had been told to stretch his foot, calf and hamstring muscles often because of his complaint of tightness in these muscles.)
4. Poor reactive strength of his foot and calf muscles
5. An out-turned foot during foot strike and during the entire stance phase of his walking and running gait. 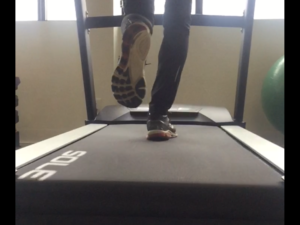 Based on these findings, I showed Mr. Runner the video of his running gait taken during his Running Gait Analysis and he was surprised to see how out-turned his right foot was compared to his left which pointed straight. I had him run on the treadmill for 5 minutes with instructions to point his foot forwards. Mr. Runner stated that his pain was minimal during this time! After this, I asked him to run as per usual with his foot out-turned and sure enough, his foot pain returned.

I placed Mr. Runner on a walking program. He also had to remind himself as often as he could to point his foot forward every time he walked at home, at work and while on his walking program. We also addressed his weakness in his hip and foot with appropriate strength exercises.

Mr. Runner progressed to walking 5km without any foot pain. We then progressed to a walk/jog program over a period of 5 weeks. Mr. Runner’s preferred foot strike pattern was forefoot. However, given that his foot and calf muscles were only slowly developing strength, I taught Mr. Runner how to run softly with all 3 strike patterns: heel, mid and forefoot to reduce the impact loads below his knee. This provided Mr. Runner with alternatives depending on his fatigue levels, speed, the incline on which he is running and terrain.

At the end of a 5 week walk/jog program, Mr. Runner successfully returned to a continuous running program. Although Mr. Runner’s foot pain was considerably reduced simply by altering his foot strike pattern, I decided to progress his running more conservatively given that it takes time for people to change their motor programs and to gain strength. Had I allowed Mr. Runner to return to full running immediately, more than likely, his foot pain would have returned. As he experiences fatigue while running, he would have reverted to his poor foot mechanics and the inevitable return of his pain.

This case study showcases many things.

1. In many instances of long-standing problems, there are usually no short-cuts or quick fixes.  In this instance, orthotics and shockwave therapy, which are both passive therapies, would have been expensive failures.

2. Tightness in muscles is often a sign of weakness and the advice given to Mr. Runner to stretch his muscles was poor. Lengthening his already weak muscles only served to reduce the necessary stiffness required of muscles to produce reactive strength. The more he stretched, the weaker he became.

3. There was no previous examination of his entire lower quadrant (spine, hips, knees, foot, ankle) and so the weakness of his hip was missed.

4. Mr. Runner admitted to driving with his right foot out-turned considerably while stepping on the gas pedal. His occupation as a driver meant that this habitual position also contributed to the out-turned foot. He now has learned to avoid this while driving. Therefore, a running gait analysis should never replace a thorough history and physical therapy examination.

5. Mr. Runner did not have plantar fasciitis. Where Mr. Runner felt pain was along his abductor hallucis muscle and not along his plantar fascia.  The differentiation of specific pain generators is vital if treatment is to be successful.

Mr. Runner recently contacted me to say that he is now running successfully and without pain. He is happily training for a fall marathon and keeping up with his exercises.