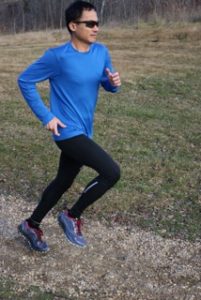 The Effect of Strength Training on Performance Indicators in Distance Runners

Beattie, Kris; Carson, Brian P; Lyons, Mark; Rossiter, Antonia; Kenny, Ian C; Journal of Strength and Conditioning Research. 31(1):9-23, 2017.
Last year was one of my best years of running. My training was consistent, I was happy with my races and I stayed relatively injury-free. My sleep patterns were consistent and I felt fitter and healthier in 2016 than I ever had in my previous years. That is, until September. While preparing for the cross country season, after a threshold interval workout, I noticed some tightness in my right hamstrings tendon near my knee in a group of muscles called the pes anserine. It was fairly mild to start but after each run, I noticed the stiffness increasing which then led to morning stiffness which ultimately led to me limping about 2 hours after each run. The pain was worsening. The diagnosis was a right distal and medial hamstring – a pes anserine – tendonitis. Swimming was out of the question as the kicking would aggravate it and so stationary biking it was, to try to maintain my fitness. After about 2 weeks of cross training, the tendon felt better but not 100%. After an attempt at another run, the tendon felt great during but worst about 3 hours later and the return of morning pain and stiffness. Long story short, I managed only 1 cross country race in September and the condition took about 8 weeks to recover.

An astute physiotherapist should always ask about what life was like for the runner before and during the time of injury onset. For me, I was in the midst of starting Elevation Physiotherapy, my own clinic, and my schedule was getting busier and busier. When a runner gets busy, what inevitably happens is his strength program usually falls by the wayside. This was exactly what was happening with me. I was running consistently and I was increasing my speed during my interval workouts but I had reduced my strength workouts from twice a week to about once every 2 weeks. I chose running over my strength workouts because I did not have time to do both.

This blog attempts to answer the question: What are the effects of neglecting strength training in distance runners?

This recent article by Beattie et al is eye opening.

One of the reasons why strength training is so important for distance runners is that it improves the ability of the neuromuscular system to rapidly produce force after a sustained period of high intensity exercise, like during a sprint finish. This may be a crucial differentiating factor in whether an elite athlete wins a race or comes in a close second or in improving upon one’s personal best times. It is the difference between finishing strong or fading during a race or increasing muscle strength and stiffness or sustaining a tendonitis. At a physiological level, strength training increases the stiffness between the tendon and muscles, recruits more motor units to muscles and increases their synchronization, and improves intra- and inter-muscular coordination. This translates to improved running economy and performance in runners. Think of running economy like your car’s economy. We don’t want to drive with gas guzzlers, burning fuel at a high rate and getting to empty so quickly before the next re-fueling station. An improved running economy means a runner will burn less fuel at a certain running speed over a measured distance. There are many factors that lends to improving running economy including a higher maximal oxygen uptake, improved running form, and yes, improved force production or strength.

So, this article investigated the effects of a 40 week strength training program on key performance indicators like running economy, maximal and reactive strength and the velocity achieved at maximal oxygen uptake in collegiate and national-level distance runners. He also examined body mass composition since one of the fears of most runners is that strength training leads to inevitable increases in body mass or weight gain, thus reducing running economy and efficiency.

Maximal Strength was assessed using the loaded squat. Reactive strength was divided into slow and fast, the latter being a plyometric-type drop jump. All physiological variables were assessed using a treadmill protocol with gas analysis using a metabolic cart.

What was the Strength program?
It was divided into 2 parts:
1. Pre-season: 2 sessions per week. Mostly maximal strength development like loaded squats with a minor element of plyometrics or reactive strength training.
2. Racing season: 1 session per week. Focus was on reactive or plyometric strength training with a minor element of maximal strength maintenance gained from the first 20 weeks.

What does this mean?

This to me is the mind blowing findings of this study. When runners neglect strength training, their muscle and tendons strength and stiffness will decrease. This explains why runners tend to develop injuries: the more we run, the weaker we get relatively, because our peripheral system (ie. muscles and tendons) cannot sustain the increasing training loads.

So, in conclusion, strength training for runners is a no-brainer. We have to do it and make time for it. Otherwise, we will repeat the same mistake I made in the fall of 2016. When life gets busy, do not neglect your strength routine even if it is just once a week.

Elevation Physiotherapy is now up and running and accepting new patients. Now, it is time for me to do the same, this time, returning to a 2x/week strength program! Here’s hoping Mr. Hamstrings stays quiet!